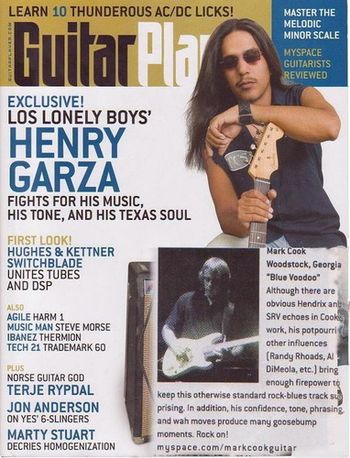 I was featured in this issue of "Guitar Player" magazine.

I must admit that when MARK COOK contacted me recently and asked if I'd give his latest release a listen, I was ECSTATIC! I immediately thought back to one of his prior releases that I had reviewed in 2003 and found myself hoping that this new disc would be as good as that one was. As a matter of fact, it was that earlier release - "AN EVENING WITH THE BLUES" - that won the very first BLEWZZY, the award we give annually to Blewzzman's favorite CD of all the CD's reviewed that year.

Although it will be difficult to not name them all, here are some of the tracks that particularly got my mojo working.

If you've got any speakers near a smoke alarm, be very careful as the opening track, "NO ONE LIKES A GOOD WOMAN (WHEN SHE'S DOWN)", comes on. This one's very hot and full of fiery funk. The rhythm section of SEAN, TOM and JOEY is rippin', the horns of SAM, MIKE and TOM are howlin', STEVE'S harmonica's hummin' and LOLA's vocals is the fuse that sets it all off.

There's no indication of anyone letting up, as the heat continues to spread into the next track, "GONNA FLY THE COOP". This one features ANDREW singing his heart out and mixing in lots scintillating scat. The horn section, once again - and as usual - are right there, and MARK and BOBBY are tearing up the guitar and keyboards. What a hell of a one-two punch for opening tracks.

"MOONLIGHT BLUES" brings things down a bit, but certainly not in quality - only in tempo. Once again, LOLA is featured on the vocals but this time she's belting out some good old down home blues, and damn can she belt it out. As you'd expect, there are lots of great blues guitar licks by MARK.

"BACK TO TENNEESSEE", is a very Sonny Terry & Brownee McGhee / Cephas & Wiggins sounding roots blues track which is all about STEVE on harmonica and LARRY on down home vocals.

"DON'T PULL ME DOWN" is another one of those tracks that everyone's tearing it up on, with RIC, one of a slew of excellent vocalists who have sung on this disc, leading the way. MARK, STEVE & JOEY are at their best on guitar, harp and organ.

"TOMORROW'S COME AND GONE", is a steamy and sultry vocal virtuoso performance by HEAVEN & LARRY. This wonderfully done 5 minute track added 75 minutes on this review because I literally listened to it 15 times over. It's songs like this that create a need for "Song of the Year Awards".

"BLUE VOODOO" is the musical comparison to the sky on a very clear and cloudless night....IT'S FULL OF STARS. Never have I listened to a CD and been this impressed with each and every performer. It breaks my heart to know that there are such talented people doing such talented things and the masses will never know about it. On the other hand, I'm thankful that I am one of the those that do.

You can visit Mark Cook on the web at: www.markcookmusic.com/

Mark Cook – An Evening With The Blues

An Evening With The Blues
By DAVE HUSSONG | Published: JULY 7, 2004

It’s obvious this Terre Haute-based guitarist is a talented individual. He’s got the chops and did all the writing and arranging on this disc. Not only the instrumental portions, but the vocal melodies, as well. This M.C. employs the talents of a number of midwest-based vocalists to handle the up-front chores. And the vocal stylistic approach is locked in on the ’70s southern rock.

This is an enjoyable initial offering, but instead of employing B.B. King and, perhaps, Robben Ford, as a jumping off spot, Cook might consider taking the listener down a Delta road or two. It’s always good to revisit Hwy. 61 or 49. Or maybe Chi-Town, just for credibility’s sake.


This article originally appeared in VG‘s May ’01 issue. All copyrights are by the author and Vintage Guitar magazine. Unauthorized replication or use is strictly prohibited.

"An Evening With The Blues" wins award